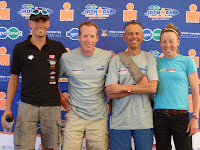 Did it and did it well getting 4 personal bests on route. 1:00:05 for the swim (including shower and run up the beach to transition. 5:40 for the bike which was an absolute blast. The run was hard, but fun and completed in 4:15 making for an overall time of 11:12:25 which was 58minutes faster than my previous Ironman outing.
Finished 292nd out of 1404 so up there. But not quite as 'up there' as a couple of people I met the following day at the slot allocation session. Ended up sitting next to fellow Britts Stephen Bayliss and Bella Comerford who had won the overall race and the ladies race respectively.
A big congratulations to the pair of them. Well done also to my travelling buddy and room mate Russell Clarke, we went out onto the run together and he finished in a time of 10:52:24, 203rd overall and 5th in his age group. His time is the second fastest by a Tri-Anglia member.
Posted by Rob at 19:00